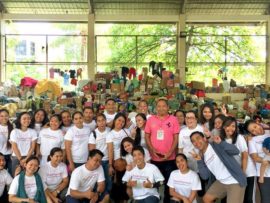 BAYANIHAN SPIRIT IN THE FACE OF NAGA LANDSLIDE

Tragedy struck Naga City in the province of Cebu last September 20, when more than 30 homes in two rural villages were buried in a landslide.  More than 70 people were declared dead and more than a thousand residents lost their homes and were brought to evacuation centers.

The Bayanihan Spirit was very much alive at Rose Pharmacy when everyone supported the donation drive for Naga City. Donations poured in from all over the nation, and in less than a week, the Rose Pharmacy family collectively came up with almost P100,000 worth of cash donations and cash pledges along with some donated essentials such as pre-packed foods and clothing. Brand medicines were also given to help victims cope with health problems such as diarrhea and cough, which were widespread among the evacuation centers. Rose Pharmacy was also able to contribute to Barog Bai, an initiative from Bai TV aimed at reconstruction and debriefings.

The team was able to pack a total of 85 bags full of starter items such as sleeping mats, blankets, towels, utensils, medicines, personal grooming kits, and other necessities. Around 27 volunteers donned their “We Care Passionately” shirts and gathered to help in distributing the packed items.

Our team members at Rose Pharmacy were among many ordinary and everyday heroes who created a powerful image – of the Bayanihan Spirit, of people who will go out of their way and work together to help those in need, and of caring passionately.

More than 3,000 runners gathered at the Ayala Terraces last July 28, Saturday, for the first ever Cancer Warriors Run 2018. The event started with warm up exercises led by Team Salonpas and Dance Diva Regine Tolentino, who co-hosted with DJ Tom Candy.

Ms. Jennifer Baylon of CWFI reminded the crowd of the cause being advocated, and talked about childhood cancer and how it negatively affects families who now need not just financial but moral support. She also said that the disease shouldn’t be a hindrance for the children to dream and lead normal lives.

With the support of our 10 partner suppliers and all the customers who registered to join the run, Rose Pharmacy was able to donate P500,000 to Cancer Warriors Foundation Inc. – an amount that can be used to buy medicines and finance the needed surgery and chemotherapy of the kids they support.

At the end of the event, the winners were recognized with medals, cash prizes and gift baskets.  All participating runners brought home special loot bags from different suppliers. Raffle prizes were also given away to lucky runners. 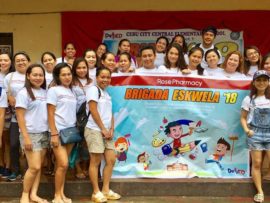 With the unified spirit of volunteerism, Rose Pharmacy team members from across the country participated in this year’s Brigada Eskwela, helping clean and re-paint classrooms at chosen public schools. With team members from Luzon, Central Visayas, Western and Eastern Visayas, and Northern and Southern Mindanao sharing the effort, Rose Pharmacy lent a helping hand to the cause that ran from May 28 to June 2 — to make the schools ready for the start of another academic year, showing that indeed, “We Care Passionately.”