Gout is a type of arthritis (joint problem) that develops in people who have high levels of uric acid (a type of waste product) in the blood.

The body produces uric acid when it breaks down purines, which are substances found naturally in the body and in certain foods.

Normally, uric acid dissolves in the blood and passes through the kidneys into the urine. However, if too much uric acid is produced, or too little is removed, it may accumulate to form crystals in, or around, a joint. This causes pain, inflammation and swelling.

When does it attack?

Gout usually occurs suddenly, without warning, and often at night. Signs and symptoms of gout include intense joint pain, inflammation and redness, and a slight fever in some cases.

A gout attack usually begins at a single joint, often at the base of the big toe. However, it can also occur at almost any other joint (foot, knee, wrist or elbow) as well.

If left untreated, symptoms usually last for about seven days for the initial attack on a single joint. Subsequent attacks can last up to three weeks and on multiple joints.

If gout has been present for many years, uric acid crystals may form small lumps (tophi) on the ears, hands, elbows and toes. Tophi are normally painless, but over time can grow and may deform joints.

In ancient times, gout was nicknamed the “disease of kings” because it typically affected wealthy, middle-aged men who indulged in rich foods and alcohol.

Factors that increase the risk of getting gout include:

Gout occurs more often in men than in women, as women tend to have lower uric acid levels than men. However, gout becomes more common in menopausal women because of the increase in uric acid levels after menopause.

Certain medication such as thiazide diuretics (medication to reduce fluid and blood pressure) or aspirin can increase uric acid levels. Hence, if you have gout, you should take paracetamol for general pain relief (e.g. headache) instead of aspirin as aspirin may worsen your gout condition.

Also, a family history of gout increases the chance of having gout as well.

Medications that control the symptoms of gout include non-steroidal anti-inflammatory drugs and steroids.

NSAIDs such as ibuprofen can be purchased from a pharmacist. They help to control the inflammation and pain caused by gout, but possible side effects include stomach pain, bleeding and ulcers.

Steroid medication, helps to control gout inflammation and pain. However, the side effects may include thinning bones, poor wound healing and a reduced ability to fight infection.

Stronger medications require a prescription from a doctor.

Reducing the risk of gout

Some studies show that consuming vitamin C, cherries, and/or drinking coffee may help to reduce uric acid levels in the body. However, vitamin C should be taken in moderation as large doses increase uric acid levels.

It is also advisable to drink plenty of fluids (up to at least three litres) to help dilute uric acid in the blood and urine. Applying ice packs to the affected joint(s) may also help to relieve the pain and swelling.

Finally, when in doubt, you should always consult a pharmacist or doctor. 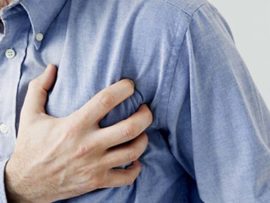 A Glance at Angina and its Risk Factors

The Best Way To Dye It Yourself